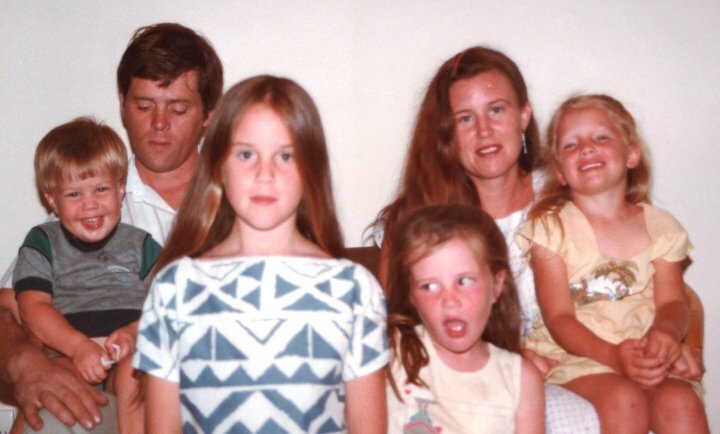 That’s me, the oldest staring at the camera and I was a total pain in my mother’s ass.

As a baby I wouldn’t sleep much, she would just turn the lights on and leave me to play with my toys. Sleeping with lights on became the new normal for my parents.

When I was 6 I screamed so much when we would drive past a park, that my parents had to start driving in round about ways to avoid parks (with another 3 kids in the car also), otherwise they had to stop, or the screaming wouldn’t!

I wasn’t more fun as a teenager.  I drove my mother nuts with my defiant behaviour. One day at age 15 she was  so angry with me for being such an ungrateful brat that she slapped me – and I slapped her back! Clearly yoga was much needed in my life?

Mum – worried where I am and what I am doing as a teenager? You should be! I didn’t actually see two movies at the cinema – I was at the beach living it up! Thank god for a lack of track your iPhone back then or my adventures would have been non existent.

I lied through my teeth and climbed out the window when you grounded me. All to the dismay of my nanna who came in with the soft touch to give me some money – only to see a note disputing the grounds on which you grounded me and in which I declared self righteously that the decision was unfair and I was going out. I had taken out the fly screen and jumped the back fence.

But you had taught me never to leave the house angry. So not long after going out I called you and you forgave me (even though I still went out for the night). To this day not leaving the house angry with loved ones is something I practice.

As a young adult it didn’t get much better, when you told me the house wasn’t a hotel (fair call) I said no problem I am moving out. At seventeen I went and lived in a friend’s shed. You said you wouldn’t give me a cent, and you stuck to it, but you did bring me some food. It taught me about having good boundaries – you didn’t give me money, but gave me what I needed (something to eat).

Two years later I had made some good choices after repeating year 12 and was at university. I decided  was going to Sumatra for six months and then India.

You came to visit me in Sumatra and left all the other kids at home – I didn’t appreciate it.

Then I went to India and that was it, email was new then so you were lucky if you heard from me every few months. You were at home fretting about large scale train crashes that were reported on the news and not hearing from me for months at a time.

And through it all – although I would say you were a little too strict – you stayed steady. You always welcomed me with loving arms, praised me and created space for me to be me. You always forgave me, thank goodness!

Then at 30 I came home, only to be embraced by you and supported on the next journey in my life, motherhood. You never gave me unwanted advice, never told me what to do and always supported me to listen to my own intuition, and demonstrated respect for my mothering.

I wrote this for the mums out there with crazy kids like me ..

For all the mum’s out there whose daughters get told by the girl guides leader your daughter is too bossy – take heed from my mum’s response which is to tell them to shove it and that your daughter is a leader.

Or all the mums who don’t always feel like the fittest, sexiest version of themselves, but don’t talk about being ‘fat’ or ‘ugly’ in front of their daughters – hopefully your daughters will have a relatively healthy body image like me (thanks mum).

For all the mothers who value and respect their daughters enough to tell them everyday they are worthy, they are valuable and they can and should choose their own path to hell what other people think – even if your daughter goes off to have adventures hopefully, like me, she will find her way back. If you love someone set them free right?

For all the mothers who like mine eventually learnt to stop lecturing your daughters – my wish for you is that your daughter, like me will love to talk to you about what is going on in life when they are older.

My mum had my back always (so did my dad, but that’s another story). I see so many women struggling to ask for what they want in their lives, their relationships, their work. Society has taught women to be compliant, to shut down their own needs, to always put others above themselves. I was taught to always think of others, to be fair, but to also put myself, my wants needs hopes and dreams into the picture.

I was never told by my own parents I was “too full on” although friends, girl guides leaders, teachers and boyfriends regularly used those exact words.

I didn’t know for probably 30 years how lucky I was, and how hard it must have been to have a daughter like me.

You may not see it yet, but our mothers have most likely always tried their best with the resources and information they had. Mine kicked butt, and her love (and my dad’s) is what provided the foundation for me to explore this world knowing I was always held in love. Were they perfect?  No.  Did they try? Hell yes they tried! None of us can parent perfectly. They did imperfectly beautifully.

I hope I can do the same for my sons.