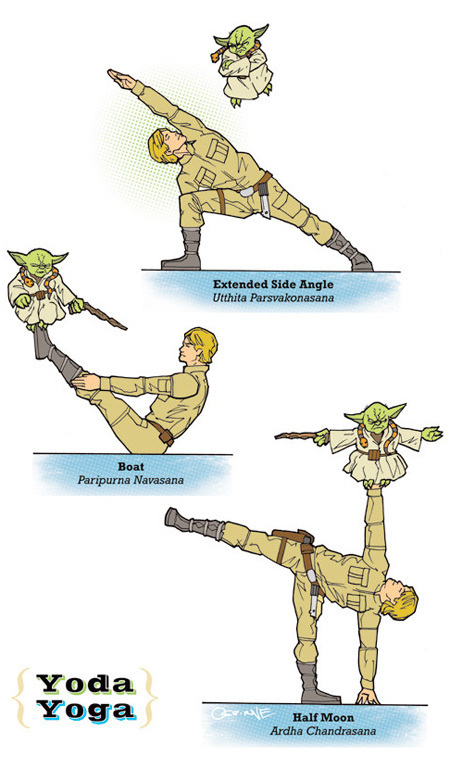 Unless you are in a total media vacuum no doubt you know the next Star Wars is out. We are off to watch it this week in Mysore, India which should be fun. In India there is always an intermission – a chance to top up on popcorn and grab a chai which is novel! With a nine year old boy we began our preparation for the big day by revisiting Return of the Jedi, my all time favourite Star Wars movie. Not simply because those ewoks are so cute! But I love what Yoda has to teach Luke about the Force. And while I know very well the Buddhist overtones of Star Wars, it struck me when listening to Luke’s visit from Obi Wan (following Yoda leaving his body) that Luke is being called upon to do his Dharma.

Dharma has many meanings. It means the law or way of things and is tied to a sense of truth and authenticity. In Buddhism Dharma (dhamma) most often refers to Buddha Dharma – the teachings or the way of the Buddha. In Hinduism we find teachings on Dharma throughout many different texts all with slight differences. However it is particularly in the Mahabharata, of which the Bhagavad Gita is a part, that the question of Dharma plays a central role.

Questions of dharma have been floating around during this trip in Mysore (Dec & Jan 2015/16). A new friend is writing a paper on it. Her question is how do you know what your Dharma is? It’s a great question and the answer is not always clear.

Both Luke and Arjuna made a difficult decision. It would have been more immediately convenient for them to be avoidant! It was a choice that they would rather not make, yet they knew, they felt, that it was the right choice. Both fought against injustice in order to bring about peace.

In both stories the symbolism of war highlights the inner turmoil that our choices may involve, there are certainly lessons for us, both in Star wars and the Bhagavad Gita when it comes to figuring out our dharma.

In the Bhagavad Gita Krishna appears to Arjuna as a reminder to people that when they don’t abide by their Dharma there is strife. Krishna explains to Arjuna:
“Whenever dharma declines and the purpose of life is forgotten, I manifest myself on earth. I am born in every age to protect the good, to destroy evil, and to reestablish dharma.”

In the dialogue that ensues from Krishna’s appearance on the battlefield, Arjuna accepts that it is his duty to defend the kingdom from the false claims of his cousin. Similarly in Star Wars, even though Luke expresses his discomfort at confronting and potentially killing his father, Obi Wan explains that without fulfilling this duty, and as the only one who can fulfil this task, the world will be lost to the dark side.

Fortunately in real life our decisions around what our Dharma are, probably aren’t as catastrophic as the choices confronting Luke and Arjuna. But in wondering what it is we are truly meant to be doing on this earth, in contemplating what our dharma might be, there is the possibility we will face discomfort and uncertainty. Particularly if the path we have found ourselves on has led us far from what is true and authentic for ourselves.

Often we find ourselves on a life trajectory that fits nicely into western capitalist culture: school, university, good job, marriage, mortgage, family. For some of us this IS our Dharma. We inherently feel at peace with our duties in life, our choices feel authentic. For many others I see there has not yet been a pause, an opportunity to explore or discover our Dharma. Many people find themselves influenced by family and societal expectations, making sensible & ‘good’ decisions in life. Often these decisions are the sum of other people’s expectations. This path has been modelled to us as the norm by others and we have taken this path as our own. Krishna explains that:

“It is better to strive in one’s own dharma than to succeed in the dharma of another. Nothing is ever lost in following one’s own dharma, but competition in another’s dharma breeds fear and insecurity.”

We each have our own dharma, and are unique. Modelling our life on another’s will not necessarily bring us happiness. Further, external success does not mean we have realised our Dharma in this life. We can only know in ourselves whether we are living our dharma because it intuitively feels authentic and right. But just like Luke and Arjuna we may encounter discomfort when making decisions in accordance with our Dharma. It may mean earning less money, having conversations with family about our future dreams and the choices we wish to make, living a life which reflects very different values to what we have grown up with, or what is accepted in our current social circles.

It is also important to know, that sometimes we are already living our dharma, but the mind gets in the way: craving, desiring and leading us away from what is true and right for us on a deeper level. Our Dharma is also not permanent or fixed. Just as we evolve and grow throughout our lifetime, so too our Dharma evolves and changes. Sometimes try as we may we can not figure out what our Dharma is. For me, I feel that I am living my life in accordance with with my Dharma, it feels right and true and deep for me. But it kind of just happened as a natural process through creating space and questioning. For me starting yoga young meant I knew the traditional path of working full time was not what was true in my heart. So I studied, created space, practiced yoga and meditation and it became apparent what felt right.

For many students I see over time as they create space each morning to practice an internal disquiet with how they are living their life may emerge. Some live for many years feeling torn between their responsibilities and living a life they deeply feel is not in accordance with their Dharma. But on other occasions, just like Luke and Arjuna, I see people make more difficult choices. They decide to live with less, allow there to be a little more insecurity by stepping away from a job they have know for a long time, or into a new job they feel drawn to. Usually I also see these people flourish when they open up to what their Dharma might be.

As Krishna says, “nothing is ever lost in following one’s Dharma”. Certainly I look forward to finding out this week what was gained from Luke Skywalker following his. My guess is that the force of light will prevail over darkness.

May the force be with you,