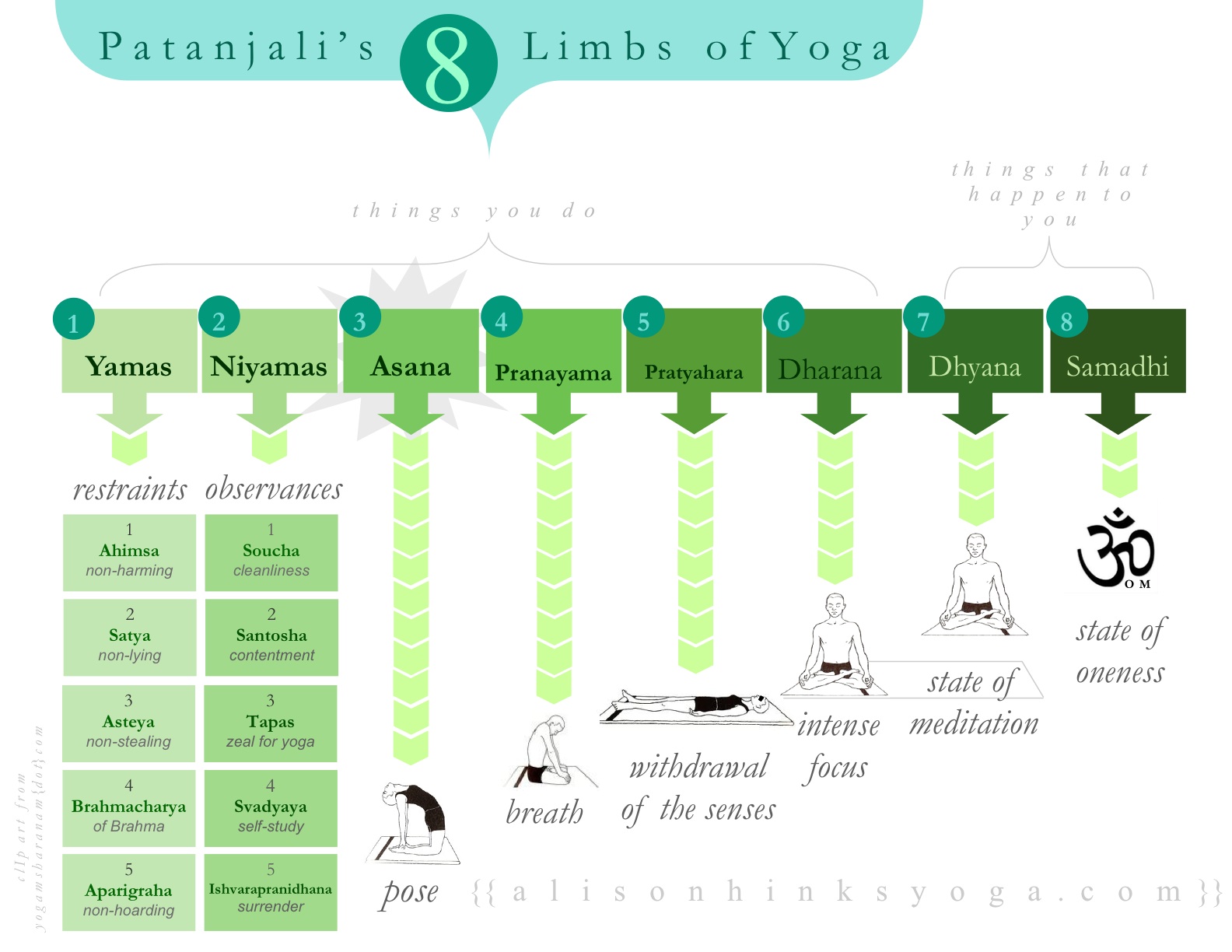 Higher Limbs, Lower Limbs, Why not drop the value judgements

Yes, perhaps this is controversial as a statement, but if you bear with me a few paragraphs I hope we can get past the controversy and perhaps contemplate the possibility this statement might potentially be true.

In the human desire to be relevant and special, and perhaps due to frustration with the apparent focus on the physical aspects of yoga in modern times, many a self styled guru of yoga have begun spruking the preponderous idea that there are ‘higher limbs’ of yoga. In an effort not to alienate in this blog, first I wish to explain what exactly is meant by limbs of yoga for the uninitiated.

Yoga basically is a lot of things to a lot of people. For some it is directly related to the Yoga Sutras which were complied by a man named Patanjali who is thought to be an actual historical figure. His work tells us a lot about the inner journey of spiritual practice and very little about actual yoga asana or pranayama. However he has been mistakenly given a great deal more kudos for his work in modern times then he actually received in his own era (See Singleton’s The Classical Reveries of Modern Yoga: Patañjali and Constructive Orientalism’, in Singleton and Byrne (eds). 2008). In the Yoga Sutras, amongst other things, Patanjali outlines the ‘8 limbs of Yoga’ which assist in the removing of obstacles so that we might experience liberation (from suffering).

The eight ‘limbs’ of yoga as outlined by Patañjali in the Yoga Sūtras (2.29) are: yāma (self-restraint); niyāma (discipline); āsana (posture);135 prāṇāyāma (breath cultivation); pratyāhāra (sense withdrawl); dhāraṇā (concentration) or holding one’s attention; dhyāna (the deepening of meditative absorption as a result of concentration) and samādhi (ecstasy).

Essentially, theses observances and practices help remove obstacles on our spiritual path. Without these obstacles in the way we can become free from the fluctuations of the mind and its incessant jumping between craving or aversion. Thus we find at the start of the Yoga Sutras the statement that Yoga is the stilling of the fluctuations of the mind.  Or as Sri K Pattabhi Jois simply put it:   “Ashtanga Yoga method – mind control method”.

So why are some of the limbs that help us to experience yoga as the stillness Patanjali described, claimed to be ‘Higher Limbs’? Partially I think this is due to the philosophical context in which the Yoga Sutras were written (sāṃkhya). For Patanjali (and in the philosophical school of sāṃkhya) the world is split into the duality of purusha (consciousness) and prakriti (matter). Worldviews which are inherently dualistic such as this encourage in the spiritually minded striving to achieve certain outcomes. Duality in this way leads us into the (sometimes) trap of striving in spiritual practice, and certainly in the way Patanjali lays it out in the Yoga Sutras it is understood that these practices are sequential moving towards the more ‘spiritual’ – thus the ‘higher limbs’.

The issue with using the category higher, is that it necessitates there be a category that is ‘lower’. Categorising the limbs of yoga in this way creates a disharmony which we see emerging in the yoga community in which ‘lower limbs’ such as asana may be denigrated, or ‘higher limbs’ such as pranayama are aggrandised. The separation and disharmony that ensues from the labelling of ‘higher’ and then in turn the implication of ‘lower’ seem to be in stark contrast to the inherent spirit of yoga as being ‘union’.

So why is this categorisation occurring? There are a variety of reasons. The most central being that asana as a limb is being promoted above all other limbs and has become – mistakenly – understood as the crux of yoga. Obviously the popularisation of yoga asana has led to a slightly misconstrued understanding of what ‘yoga practice’ might entail and look like. Yoga has become synonymous with lu lu lemon, chai lattes, manduka mats, coconut water and heated studios with classes being held to the latest beats. I can understand then why the current proliferation of yoga as being merely physical can ruffle some feathers. Conversely when we read or talk of the ‘Higher Limbs’ we have an altogether different stereotype and perhaps images jump to mind of someone sitting alone cross legged in meditation. For some yoga teachers the latter image is a more comfortable way to understand the type of services they are offering.

As practices which involve more physical stillness they also resonate with our stereotypical ideas of what spirituality looks like (eg; sitting cross legged in meditation).  Further, the focus on the ‘Higher Limbs’ tends to emerge in those with a penchant for ‘spiritual experiences’. People want to collect them like others collect shoes or yoga pants :). They are helpful in that they can provide much needed motivation to engage in spiritual life, but they become a form of spiritual materialism which can deepen our suffering.  Tibetan Buddhist Chogyam Trungpa touched on this notion when he said

“Walking the spiritual path properly is a very subtle process; it is not something to jump into naively. There are numerous sidetracks which lead to a distorted, ego-centered version of spirituality; we can deceive ourselves into thinking we are developing spiritually when instead we are strengthening our egocentricity through spiritual techniques. This fundamental distortion may be referred to as spiritual materialism”

The desire for ‘Higher Limbs’ of yoga and the potential spiritual experiences that await can become just that – spiritual materialism.

Perhaps we might examine our reactions to yoga as it is understood and practiced in modern times and reframe how we see the 8 limbs. Personally I don’t see the 8 limbs having any limb that is higher or lower, although I resonate with the sentiment that it is a shame that students don’t get to experience the richness of the 8 limbs and how they might provide the basis for a spiritual life. This doesn’t however necessitate denigrating the practice of asana. Asana can be be so much more than just the physical, and for most it is. The process of undertaking a regular, disciplined asana practice is one in which we would be hard pushed to not experience or cultivate a number of the other limbs of yoga. It is not a lower limb simply because it involves contorting the body. It is the attitude and intention brought to the asana which enables us to experience the depths of yoga. The popularity of asana, while it could be tempered with stillness practices, attests to the efficacy of yoga asana working on a variety of levels. Depending on why people undertake asana practice it may just be that it isn’t and might never be relevant for that person to intensively study some of the supposed ‘higher limbs’. There is no need for chastising.

And on a final note, all one has to do is look at the many a fallen yoga guru to realise that the supposed ‘Higher’ limbs of yoga are worthless without the ‘lower limbs’. Spiritual experiences are of no merit if they do not shape our actions. Living a life in observance of the ethical and moral foundations (yamas & niyamas) of Patanjali’s yoga are the biggest challenge we all face in yoga practice. Not only are they the biggest challenge for most of us, but if the “lowest” of the “lower” limbs (ahimsa – non harming) was observed our world would be a radically different place to live.

So next time you hear a discussion of the higher limbs of yoga, just remind yourself that higher or lower doesn’t really come into it when we delve into spiritual life. Just keep it simple, do asana, practice pranayama, sing the names of God, meditate or help those in need, whatever works for you. Chasing higher or spiritual experiences is just as self involved as the current asana-self promoting-selfie-rage that we find in modern yoga, no better no worse. If the experiences come, GREAT, if they don’t come GREAT. But in the meantime why not try be a nice person and live a life based on the first ethical principle Patanjali outlines: Ahimsa, life a life in which you minnimise harm, physically, mentally emotionally, spiritually, ecologically to people, all beings and the earth. Surely that is a higher calling than practicing the “higher” limbs?

Forget about enlightenment.
Sit down wherever you are and listen to the wind that is singing in your veins.
Feel the love, the longing, and the fear in your bones.
Open your heart to who you are, right now, not who you would like to be.
Not the saint you’re striving to become.
But the being right here before you, inside you, around you.
All of you is holy.
You’re already more and less than whatever you can know.
Breathe out, look in, let go.
– John Welwood –

*Clearly there is a whole lot of nuance I have left out of this to make my point.